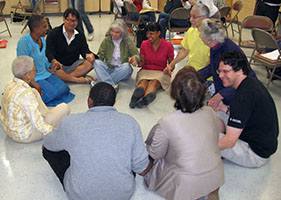 Looking back, I'm surprised that I found my way to that first SEED circle. About ten years into my teaching career, almost every in-service learning opportunity I'd experienced had registered within a disappointingly narrow range on my personal response scale, from tedium at best to mild torture at worst. Mine was the usual conditioned skepticism any workshop presenter faces from experienced teachers.

Twin Cities colleagues had been talking for years about SEED, and I was interested in the kinds of conversations they were having. Still, I was a secondary teacher, wearing some conventional blinders concerning staff development. Wasn't this really more for social studies teachers? How would it fit into my skills-based special education curriculum? And what was this about "life-changing" experiences? C'mon, really?

Something about that circle immediately seemed more like home than any of my other professional involvements.

Despite the doubts and questions, I jumped in along with the others as we read our self-introductory writing assignments, going around the circle, not interrupting, listening deeply. Something about that circle immediately seemed more like home than any of my other professional involvements. I felt engaged and accepted, and by the end of the evening had started to believe in the real possibility of what the SEED brochure called "personal and professional growth." That felt like something I'd been looking for, without knowing it, for a long time.

As a Minneapolis high school student in the late 60s, I'd been active in human relations and social justice, but lately not so much. Recently, my wife and I had moved our young family from a lively, integrated urban neighborhood to a very small town, where we would be the only multi-racial family for the next decade. The district was enrolling small but increasing numbers of students of color, and tensions had surfaced among groups of students, as well as divisions between educators about how best to respond.

I hoped SEED might help compensate for some of the urban diversity I was missing. Maybe it would also help me recharge my activist batteries, or suggest productive avenues for involvement with my students and colleagues. Maybe I could even learn something about my older son's sullen silences and outbursts of rage, as he struggled with his emerging Asian American identity while shrugging off annoying harassment and unwanted attention for being different.

So, propelled by a variety of forces, I stumbled into my place in that first SEED circle, and have been coming back ever since, as participant and leader and participant again. I have been deeply engaged by the books, speakers, and films, but in the end, it has always been the circle that has pulled me into SEED and held me there.

Other educators, with their own driving forces, were similarly attracted and engaged. There were 12 teachers in that first Winona seminar in 1997, with outside funding and leadership. Within five years, our district was supporting three seminars each year and had sent five staff to summer leadership training. By 2005, roughly half of the teachers and paraprofessionals in the district had been SEED group members. Most said their favorite aspect was the honest and heartfelt interactions they had with each other inside the SEED circle.

Each participant's unique and individual voice is heard, unless they choose to pass, which is always acceptable. Everyone listens, carefully and respectfully, not as representatives of their building or department or grade level, but as individuals.

What makes the "discipline of the circle" so crucial and emblematic for SEED groups? For starters, everyone gets equal "air time," even those quiet people who seldom speak up in larger, less structured discussions. Each participant's unique and individual voice is heard, unless they choose to pass, which is always acceptable. Everyone listens, carefully and respectfully, not as representatives of their building or department or grade level, but as individuals. Teachers find this incredibly refreshing, partly, I think, because we spend so much time in committees and meetings, or managing the dynamics of a classroom. In the SEED circle, you can speak and listen for yourself.

Of course, that means you will tend to pay close attention to the words that come out of your mouth, which can be very helpful as you work to express yourself accurately and respectfully about complex issues. For example, let's say you have been asked to describe an incident or situation in your life where you were affected by white privilege. For white people, that's a task that can often provoke feelings of defensiveness, avoidance or withdrawal. In the circle, it's easier to stay with the challenge because you know you'll be able to listen to everyone else think it through too. And in the end, there will be a sense of shared accomplishment, having collectively described the unspoken elephant that fills the room whenever race or ethnicity is present.

The SEED circle needs to feel safe. Assuming your facilitator is skilled and assertive, you will not have to worry about being criticized by debaters, distracted by complainers, or mocked or ignored by anyone. This makes it possible to take risks, as you work on developing your "courage muscle." Like anything new, there are fears and anxieties at first, followed by practice, mistakes, and small signs of progress.

Along the way, it occurred to me that the more I brought to the circle, the more benefits I took away. (And yes, there is a circular logic at work here.) I remember swallowing hard at some point and injecting my own adoptive parenting issues into the discussion. What I took away was support and encouragement, along with specific anti-racism concepts that I could often bring home to dinner table conversations with my wife and sons. From racial identity formation to family diversity, seminar topics provided me with points of connection to my family as well as my school, and the circle was where I learned to articulate those connections. It was also the place where I knew that, next month, my friends would hold me accountable for telling what I'd done lately to align my behavior with my values and beliefs.

Of the many ways that SEED experiences have infused my teaching, parenting and community involvement, circle work stands out as most basic and most multi-faceted. I've found myself adapting the practice to classroom discussions, family meetings, and even committee decisions.

Of the many ways that SEED experiences have infused my teaching, parenting and community involvement, circle work stands out as most basic and most multi-faceted. I've found myself adapting the practice to classroom discussions, family meetings, and even committee decisions. Whether you're a SEED participant, leader, coordinator, or supporter, I commend to you the circle in all its simplicity and complexity. In fact, I humbly suggest that, if circle time is not given sufficient time in your seminars, you will be left with SEED Lite, or worse, a generic educational in-service.

So let's imagine that you are here, sitting in the circle. You can tell by a gesture from the leader or the talking piece being handed to you that it is your turn. Will you talk about something easy or difficult? Build on what someone else said, or veer off in a new direction? Frame a question about the book we read, or tell a story about your students, or talk about a personal challenge? You're not sure yet, but whatever you say will not have been on the agenda, or the leader's lesson plan for the evening. It'll be a surprise to all of us, and we're looking forward to what you have to say. Welcome to the SEED circle.